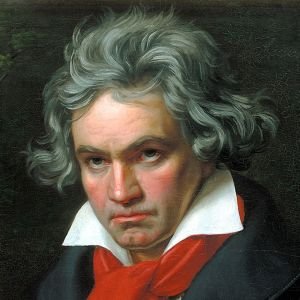 Ludwig van Beethoven, born in December 1770 in Bonn into a musical family, attracted attention early in his life thanks to his outstanding musical talent. In 1792 the Prince Elector of Bonn sent him to Vienna to enable him to perfect his knowledge through studies with Franz Joseph Haydn. Soon Beethoven's pianistic and improvisational talents were the talk of the town in Vienna. Nevertheless, the city was shocked at what then was regarded as his unusually rude behavior toward the aristocracy. In 1801 the first signs of his encroaching deafness became noticeable. By 1810, Beethoven had almost completely lost his hearing. His deafness was often cited by contemporaries to explain why his later works were so difficult to understand.

Beethoven was one of the first independent free-lance composers, he did not earn his living in a permanent position at some court, but rather lived on his music and the aid of sponsors. This enabled him, freed from the demands and the taste of his time, to develop a style often described as "heroic-emotional' but also imbued with great diversity. And there was hardly any genre in which Beethoven didn't use his incredible intensity and intellectual acuity to create something truly revolutionary. From chamber and piano music all the way to his progressive late string quartets, Beethoven created a true Opus Magnus of the "classical“ era. His works advanced to become a pivotal element of the concert repertoire and were cited as an - often burdensome! - example and challenge to many succeeding composers.